Skip to content
HomeNot much love for the TEF*

How do we like the Teaching Excellence Framework so far? According to a survey of participating higher education institutions conducted earlier in 2017 – 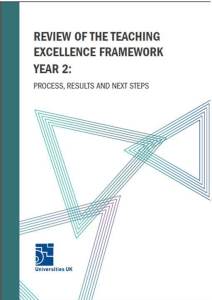 after documents were submitted but before results were announced – the answer looks like a resounding: ‘not much at all, thanks’. This survey, part of a rapid-response Universities UK review of the TEF, poses some important questions, centring particularly on the relation between future costs and benefits.

The survey results are heavy with the collective shrugging of PVC shoulders. Asked whether ‘The TEF will accurately assess teaching and learning excellence’, 73% of respondents actively disagreed while just 2% agreed. Given that only 83 universities responded, that means the managers of only two universities in the entire country are prepared to argue that the TEF does its job. Or, to be more accurate, that was the case before the feel of a gold medal possibly changed some minds.

It’s perhaps also driving spending decisions within universities. Asked about investment subsequent to the announcement of TEF in 2015, the general attitude seems to be: ‘well, you see, we were going to do that anyway’. Indeed 53% said TEF had no influence or impact on such decisions. But the raw facts of investment in learning and teaching in this period are nonetheless impressive: ‘additional investment in academic support’ (over 70%); ‘additional investment in learning and teaching’ (over 80%); ‘new progression routes for teaching’ (over 20%).

There are plenty of critics of UK higher education who are asserting, on the back of frankly bugger all evidence, that universities are not investing along these lines at all. We’re spending it all on vice-chancellors’ salaries, their houses and, like, loads of other fat-cat stuff. Maybe these critics would say: well, the universities would say they’re doing all that worthy stuff, wouldn’t they? But it’s actually dead easy to document this investment, if anyone cares to look; in fact those provider submissions will help. Our critics are fixated on the lack of competition on price, but anyone working in higher education knows that there is intense competition at the level of quality.

Those, including me, who would argue from this point that the TEF is too important to be allowed to fail might also derive comfort from the estimated cost. Taking account of estimates of staff time devoted to the 2017 TEF by universities, the cost came in at about £4.1 million. Now I know what you’re thinking: we could employ at least nine extra fat-cats for that money. We could let them loose to roam wastefully around the country. But it’s worth remembering that the REF comes in at £212 million. If the TEF helps universities, in the face of ill-informed criticism, to demonstrate commitment to learning and teaching, maybe it’s a steal at £4 million.

But I sense a dilemma. The devastating lack of confidence in the process must be addressed, since indifference could so easily lead to cynicism, and from

there to notoriety. Hence the attention that will be devoted to responses to the questions concerned with ‘priorities for future development’. There’s not exactly unbridled enthusiasm here, but let’s work with what we’ve got. Among other things, we have some interest in measures of ‘learning gain’, a fairly solid commitment to the value of teaching qualifications, and a vague appeal to the idea of ‘new metrics’ and ‘more sophistica[tion]’.

Sophistication and new metrics, however, sound kind of expensive. Measuring learning gain is a bottomless money-pit. And subject-level TEF, to which the government remains committed in the face of an overwhelming lack of interest within the universities, is predicted to cost up to £13.7.

So what’s the value to the sector of a TEF that will command a greater degree of confidence? One of the intriguing facts offered in this report is that there was a high correlation between Guardian league table results – which cost the sector nothing – and TEF results. I think I might have predicted that would happen; although if I did, I’ll concede that it was always likely to be the case. Consequently, it seems to me self-evident that if TEF in future is to be demonstrably better than existing league tables, and certainly if it is to be used as the basis for differentials in fees, it will inevitably become significantly more expensive. At what point will its value justify its cost?

* Published under a different title by wonkhe.com